In the wake of much public outcry from the tens and tens of people who read The Sable Arm, an update from your humble blogospondent:


Greetings and happy summer to everyone!
I apologize for the dearth of posts over the past three months – life has been crazy as of late.

I’ve had the privilege of working at Arlington House: The Robert E. Lee Memorial since May and I’ve had a blast delving into the history of America’s most hallowed ground. For those of you who may be interested, we will be commemorating the 181st anniversary of the marriage of Mary Custis to God’s Second Son (Robert E. Lee to you mere mortals) this Saturday with period dancing, burnt sacrifices and offerings to Ole Marse Robert, and more!

OK, I lied about the whole sacrifice thing, but it will still be a great event…


Also going into effect soon will be a Civil War tour led by yours truly that will explore the history of Arlington House during the Civil War and visit the graves of such Civil War luminaries as John Gibbon, Phil Sheridan, Johnny Clem, Fighting Joe Wheeler, EOC Ord, Hiram Berdan, Phil Kearny and more!
One fascinating aspect of working at Arlington House is getting to know the little-told tale of Freedman’s Village, a contraband camp that was transformed into the first home that thousands of former slaves would live in as free people until it was shut down by the government in 1900.

In terms of the USCT story, over 1,500 USCTs are buried in sections 27, 23, and 13 including Medal of Honor recipients from New Market Heights. In addition, Fort Corcoran, training ground of the 107th USCT (seen below in this famous photograph) was located on the former grounds of the estate that Robert E. Lee knew as home for 30 years. 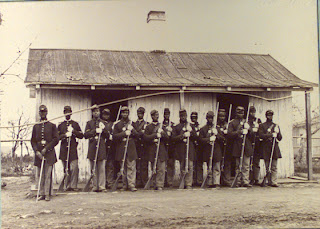 I hope to post more on Freedmen’s Village and United States Colored Troops buried at Arlington in the near future, but until then please stop by and say hey.

More to follow…
Posted by Jimmy Price at 9:06 PM 2 comments: