A Battlefield Monument at New Market Heights: The Time Has Come

In the epilogue to my first book, The Battle of New Market Heights: Freedom Will Be Theirs By The Sword, I wrote the following:

If the…commemoration of the sesquicentennial of the American Civil War is to have any truly lasting impact, the preservation and interpretation of endangered sites like the New Market Heights battlefield must top any list of priorities. Until this situation changes, Joseph T. Wilson’s poetic lament first published in 1892 will remain a tragic reality:

No marble shaft or granate pile mark the spot
Where they fell – their bones lay harvested from sun-rot,
In the Nation’s cities of the dead. Hannibal led
No braver than they through Alpine snow, nor wed
To freedom were Greece’s phalanx more, who o’er gory
clay
Followed Butler to New Market Heights that day.

Seven years later, with the sesquicentennial in the rear-view mirror, I’m sad to say that this situation has not much changed.

Still, the story of the remarkable heroism displayed by the US Colored Troops and the steep price that they paid in their own blood remains compelling. As fellow historian and blogger Tim Talbott wrote after a trip to what remains of the battlefield:


It would only be just for some type of monument to be erected at the little park just east of the I-295 and New Market Road intersection to honor those soldiers that fought so gallantly at New Market Heights. Hopefully, some day that tribute will come to fruition.

I recently wrote of how the campaign that New Market Heights was a part of has been getting some much-needed attention and told of my efforts to help SGT Milton M. Holland, a New Market Heights Medal of Honor recipient, regain his revoked battlefield promotion to the rank of captain.

With these hopeful tidings, I am happy to announce yet another piece of good news – an effort is currently underfoot to have a battlefield monument erected on the New Market Heights battlefield!

The tentatively-titled New Market Heights Memorial Foundation is currently in the planning stages, with the aforementioned Tim Talbott, Director of Education at Pamplin Historical Park, and myself at the helm.

More details will be forthcoming as the new year unfolds, but Tim and I are heading into the television studio on December 27th for a thirty minute discussion about the Battle of New Market Heights and our hopes to commission a statue that pays proper homage to the white officers and African American enlisted men that fought with the US Colored Troops on September 29, 1864.

This day is long overdue – stay tuned to this blog and social media for more information as we progress towards the goal of honoring the heroes of New Market Heights!
Posted by Jimmy Price at 1:52 PM No comments:

Greetings and salutations everyone! My apologies for another extended break from blogging. While my posts have grown few and far between, my passion for the topic of the American Civil War has not waned, I can assure you.

Today I received an email that “got my dander up,” to use a 19th century idiom. How this topic eluded me for so long escapes me, but once it was brought to my attention I knew I had to get involved post haste. 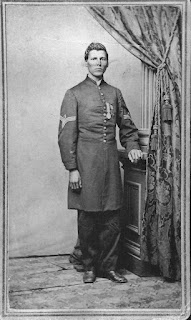 The topic in question is an ongoing effort to promote New Market Heights Medal of Honor recipient Milton M. Holland to the rank of Captain, as was the wish of his commanding general, Benjamin F. Butler. Holland, along with other heroes of the September 29, 1864 action at New Market Heights, were denied battlefield promotions due not to any lack of heroism or devotion to duty, but to the color of their skin.

Holland, who was born a slave in Texas and whose father was also his master, eventually found freedom and moved to Ohio in time for the outbreak of the Civil War. In 1863 he began actively assisting with the recruitment of an all African American unit initially known as the 127th Ohio Volunteer Infantry (Colored), later known as the 5th US Colored Infantry. In one of his recruitment speeches he said:

There is a bright day coming for the colored man, and he must sacrifice home comforts, and his blood if necessary, to speed the coming of that glorious day.

To Holland, these were not empty words – he eventually rose to the rank of First Sergeant in the 5th USCI and, during the Battle of New Market Heights, he “took command of Company C, after all the officers had been killed or wounded, and gallantly led it,” according to his Medal of Honor citation.
It was this action that inspired Ben Butler to promote Holland to Captain, a promotion that was nixed due to the uncomfortable notion of a having a black man as an officer.

Now, politicians from Texas and Ohio are renewing their effort to have the President of the United States “provide for the posthumous commission as a captain in the regular Army of Milton Holland, who, while sergeant major of the 5th Regiment, United States Colored Infantry, was awarded the Medal of Honor for gallantry during the Civil War.”

This language comes from H.R. 1010 of the 114th Congress, a bipartisan bill authored by Rep. Steve Stivers (R) of Ohio and Rep. Al Green (D) of Texas. This legislation was introduced in 2015, but was also attempted in 2013 (H. R. 3364) along with a letter to then-President Obama asking him to promote Holland to captain.

President Obama’s office deferred the matter to the Department of the Army, and the bill was referred to the Subcommittee on Military Personnel.

More recently, Rep. Stivers sent another letter to President Trump, who has once again referred the matter to the Department of the Army. While Rep. Stivers has been able to have the Army confirm the veracity of Holland’s initial promotion, he was also told that the “information threshold” has not been met to confirm that Holland does indeed deserve the promotion, according to a November 30th article in the The Athens Messenger.

I find this last claim to be ludicrous, as Holland’s story is well-documented (see: https://sablearm.blogspot.com/2011/11/profile-in-courage-milton-m-holland.html) and his Medal of Honor should go a long way towards establishing the merits of his case.

Stivers told the Messenger, “I would encourage anyone that has documentation related to Milton Holland to reach out to my office. Any information would help as we continue to build a case.”

Today I received an email requesting that I link up with Rep. Stivers’ office and other Civil War historians that are working to correct this matter and I unhesitatingly accepted.

Stay tuned for updates and further information as this story unfolds!

Posted by Jimmy Price at 2:21 PM No comments: