Can We Honestly Say that the USCT Story is Still “Forgotten”? 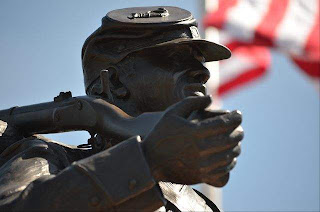 Today I saw an advertisement for an upcoming Civil War event that is taking place in Richmond that features a living history program about USCTs. While it is always gratifying to see that such programs are taking place, the blurb advertising the event mentioned that it would honor “the conflict’s 200,000 unsung heroes.”

Something about that phrase bothered me, and the question that eventually formed in my head was – is it still fair to portray the story of African American Union soldiers using terms like “unsung,” “forgotten,” and “neglected”?

I would gander that such adjectives were appropriate during the 125th commemorations, but I’m not so sure that they are applicable in 2013. A random sampling of some reasons why I would say this would include:

1. A recent series of blog posts that dealt with the issue of historic sites interpreting the USCT story at places where USCT units did not even serve

2. USCT inclusion in popular Civil War art – something that was once reserved for showing every square foot of territory visited by Robert E. Lee, Stonewall Jackson, and Nathan Bedford Forrest during the war (indeed, the great Don Troiani has a print coming out in June that shows the 6th USCT at New Market Heights!)


3. New scholarship on previously overlooked people and battles
4. The fact that United States Colored Troops are front and center in Spielberg’s Lincoln
5. A museum and memorial in Washington DC solely dedicated to the history of US Colored Troops

6. Special events such as the USCT Grand Review in 2010 and the upcoming commemoration of General Orders No. 143 at Arlington National Cemetery on May 18th

Now, I’m in no way suggesting that we have exhausted the field – far from it. But I think we have achieved a level of general awareness of the contributions made by US Colored Troops to stop claiming that they have been relegated to the sidelines of Civil War history.

I don’t fault the event organizers for using such language – having been in the field of public history for 15 years, I certainly sympathize with the person who wrote the advertisement. You’re not going to draw a large crowd by using bland language that doesn’t “hook” the average person who could care less about history.

That being said, what do you think?

Would you still consider the saga of United States Colored Troops a “forgotten” aspect of Civil War history?
Posted by Jimmy Price at 9:00 PM 2 comments:

I always enjoy reading the thoughts and articles posted by Richard Williams over the Old Virginia Blog, and thought I’d pass along this most recent post about the discovery of some USCT relics.


I’m still fervently hoping to find cool stuff like this in my back yard, but…
Posted by Jimmy Price at 10:18 PM No comments:

In a recent post over at Civil War Memory, Kevin Levin asked a series of probing questions about the ways in which USCT history is interpreted at public sites.

Part of one question in particular piqued my interest – “have we inadvertently made the message visitors receive [about US Colored Troops] too celebratory?”


This is something I have struggled with, especially when it comes to battlefield atrocities and the refusal by some USCT units to take prisoners.
One cannot approach the topic of US Colored Troops without encountering numerous occasions in which black soldiers were ruthlessly cut down on the battlefield while in the act of surrender. Olustee, Fort Pillow, the Crater, Saltville – the list of places where Confederate troops perpetrated these war crimes goes on and on.


But there is a flip side to this coin, and the way it is presented in the grand narrative can be problematic. Just as one can find numerous examples in Civil War texts that lay out the atrocities committed by rebel soldiers, one can also find the examples of when US Colored Troops went into action shouting “Remember Fort Pillow!” and encouraging their fellow soldiers to “raise the black flag” and give no quarter to any Confederate soldier who sought any.
Take, for example, an incident made popular in the opening scenes of Spielberg’s Lincoln – the clash at Jenkins’ Ferry.


Here is how the scene plays out in Tony Kushner’s script:
There’s no discipline or strategy, nothing depersonalized: it’s mayhem and each side intensely hates the other. Both have resolved to take no prisoners.
HAROLD GREEN (V.O.)
“Some of us was in the Second Kansas Colored. We fought the rebs at Jenkins’ Ferry last April, just after they’d killed every Negro soldier they captured at Poison Springs….So at Jenkins’ Ferry, we decided warn’t taking no reb prisoners. And we didn’t leave a one of ‘em alive. The ones of us that didn’t die that day, we joined up with the 116th U.S. Colored, sir. From Camp Nelson Kentucky.”
Private Green coolly relates the story of this atrocity without batting an eye, and Lincoln gives no obvious sign of disapproval for what he would know to be a violation of the articles of war. Thus, the audience is lulled into thinking that the action of Green and his compatriots was perfectly acceptable.

The fight at Jenkins’ Ferry (April 30, 1864) was retaliation for the Battle of Poison Spring (April 18, 1864) and was every bit as cold and ruthless as it appears on screen.


But one is inevitably left asking the question – if it was wrong for Confederates to show no mercy to surrendering black troops, what made it acceptable for USCTs to engage in the same activity?
Indeed, the Union soldiers who witnessed Jenkins’ Ferry wrestled with this question themselves. One white northerner wrote after the battle: “It looks hard, but the rebs cannot blame the negroes when they are guilty of the same trick.” Another simply observed, “It would not surprise me in the least if the war would ultimately be one of extermination. Its tendencies are in that direction now.” (Note: for a great treatment of Poison Springs and Jenkins’ Ferry, see Gregory J. Urwin, “’We Cannot Treat Negroes…as Prisoners of War’: Racial Atrocities and Reprisals in Civil War Arkansas” in The Price of Freedom: Slavery and the Civil War, Vol. 1).


Since the cause that the USCTs were fighting for is so much more compatible to 21st Century America’s views on justice and freedom, it seems as if these incidents have flown under the radar and are taken at face value as the Confederacy’s just deserts for fighting to establish a slaveholding republic in the first place. Indeed, that very well may be the case.
But what if it isn’t?


Even George Burkhart in his work Confederate Rage, Yankee Wrath: No Quarter in the Civil War writes that if the black Union soldiers and their commanding officers had ever been court martialed for killing soldiers in the act of surrender, they “would have packed many courtrooms. They killed a large but unknown number of wounded, surrendered, or captured Confederates. Though their lawyers might contend that the defendants only gave as good as they got, that argument would not have saved them” (p. 247).
As we continue into the Sesquicentennial and the topic of emancipation and black military service takes center stage, we would do well to wrestle with such vexing questions. The struggle is worthwhile.
Posted by Jimmy Price at 10:25 PM 5 comments: