Well, I hope that everyone had a wonderful Thanksgiving and is prepared for the insanity that is Black Friday.

I had the pleasure of viewing Steven Spielberg’s Lincoln on Wednesday evening and, while I am still sorting through my own feelings about the film itself, suffice it to say I was extremely impressed and any historical errors I may have found pale in comparison to the sum of what may very well be the best Civil War era film we will ever see in our lifetime. 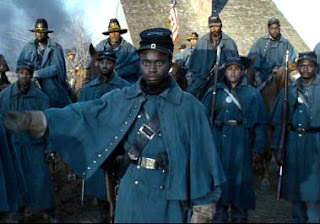 Before I went to see the movie I was interested to know what other historians had to say about the film and it’s overall faithfulness to the historical record. And when Kate Masur published her critical review in the New York Times, stating that African Americans were portrayed as being passive spectators rather than active agents in the process of their emancipation, I thought that this could be a potentially devastating critique, if true. And I must admit I paid special attention to how Mr. Spielberg portrayed the few African American characters (many of whom, I should mention, are United States Colored Troops) when I finally got to view the film.


In the end, I think that Masur went too far in her criticism. For instance, she states that “Mr. Spielberg’s ‘Lincoln’ gives us only faithful servants, patiently waiting for the day of Jubilee.” Perhaps she missed the opening battle sequence which showed USCTs locked in mortal combat with Confederate soldiers? These African Americans were hardly being “passive” when they were shooting, bayoneting, punching, and drowning their enemies and then later bragging that they had killed 1,000 without taking a prisoner.  Masur also criticizes a fictional dialogue between Lincoln and Elizabeth Keckley in which Lincoln admits his unfamiliarity with African Americans and his ignorance of how they will fare after slavery has been abolished. While Masur criticizes this scene for being “awkward” and diminishing Keckley, I found the scene to be powerful and refreshingly honest.
Hari Jones of the African American Civil War Memorial has responded to many of Masur’s criticisms in his latest blog post, which can be found here.
In response to the criticism that Masur and others have made about the exclusion of Frederick Douglass from the film, Jones states that “Spielberg’s interpretive choice to note the military contributions of African Americans rather than to find a way to include an African American editor at the margins should be applauded not censured by those who seek to include the role of the enslaved in the ‘dynamic of emancipation’ that was occurring inside the frame.”
It is easy to bring an entire career’s worth of historical training and inflict it upon a film that is not attempting to be purely a history lesson.

While there are some things that Spielberg and company got wrong with this film, I consider it a minor miracle how much they got right.
Posted by Jimmy Price at 9:46 AM 2 comments:

In a previous post, I raised the possibility that some of the Custis-Lee slaves who had resided at the Arlington estate may have joined the U.S. Colored Troops due to the nearby location of Camp Casey – a training ground for many USCT units located near the present-day site of the Pentagon. To ponder the irony of a slave that Robert E. Lee had overseen taking up arms as a USCT was a fun “what if” – but could I prove it?


Well, I present to you Lucius Bingham.
The name “Lucius Bingham” as it pertains to Arlington House first appears in the 1858 inventory that was taken following the death of Lee’s father-in-law, George Washington Parke Custis in 1857. The 63 members of Arlington’s enslaved community are listed each by name and in family groups.   The husband/father is listed first followed by the wife/mother and then the children.  Seven interrelated families (the Binghams, Burkes, Checks, Grays, Norrises, Parks’ and Taylors) worked at the Arlington plantation. Many of them or their ancestors had come to Arlington with Custis from Mount Vernon in 1802. Unfortunately, there are no birth dates or ages on this inventory but since Louisa and Austin Bingham are listed as Lucius’ parents, we can gain some insight into how old he was. Louisa would have been 58 years old when this inventory was taken, which would put her youngest children in their late teens and early twenties considering how many children she had.

The name “Lucius Bingham” does not appear in any record that I have been able to find until 1865 – when a 21-year-old laborer from Virginia named Lucius Bingham enlists as a substitute in the United States Colored Troops in Washington DC. He would be assigned to Company A of the 38th USCT, a unit recruited mainly in Virginia. If this is the same Lucius Bingham that grew up working at Arlington, he would have been freed in late 1862 when Robert E. Lee issued his letter of manumission for all of George Washington Parke Custis’ former slaves (the Custis will stipulated that his slaves were to be freed within five years after his death.) Since we know that many Custis slaves stayed on to work at the newly-established Freedman’s Village at Arlington, it is quite possible that young Lucius worked there until he enlisted, which would explain his occupation of “laborer.”

Now, I wish I could say that Bingham went on to have an illustrious military career (the 38th was at New Market Heights, after all) but he served a one year term of enlistment starting on February 28, 1865. According to his Compiled Service Record, he accompanied the 38th to Texas after Lee’s surrender and was then mustered out when his enlistment expired. And after that, the trail goes cold. NARA has no record of Bingham or his widow (assuming he had one) filing for a pension, so it is going to be a difficult challenge to put the pieces of the puzzle together and say with certainty that the Lucius Bingham who was enslaved at Arlington is the same Lucius Bingham who fought for liberty in the USCT. But I think a good circumstantial case can be made.
So what would it mean if Bingham was a Custis slave who went on to don Union blue? Well, the “Lee didn’t own slaves but Grant did” crowd would be hard put to explain why a slave that Lee controlled at Arlington would jump at the opportunity to enlist in the Union army. I would imagine that a happy slave who was well treated would not be over eager to put his life on the line to join the army that is battling a Confederate army under the leadership of his former master.

Also, if more information can be found on Bingham, it may help tie together the story of Arlington’s slave families. Some families such as the Syphaxes are well documented and individual stories such as those of Selina Gray and Jim Parks help shed light on this neglected topic. Finding out more about a member of one of the largest slave families at Arlington will undoubtedly assist in fleshing out the slave narrative at Arlington House.

As always, I will continue to research this fascinating “what if” and report any new findings here on The Sable Arm.
Posted by Jimmy Price at 8:02 PM 3 comments: