Drones in the Great Hive

In June of 1865, Medal of Honor recipient Christian A. Fleetwood wrote a letter explaining why he chose not to re-enlist in the United States Colored Troops. Towards the end of the letter he expressed disappointment and disillusionment:

A double purpose induced me and most others to enlist, to assist in abolishing slavery and to save the country from ruin. Something in furtherance of both objects we have certainly done, and now it strikes me that more could be done for our welfare in the pursuits of civil life. I think that a camp life would be decidedly an injury to our people. No matter how well and faithfully they may perform their duties they will shortly be considered as 'lazy nigger sojers'-as drones in the great hive.

Fleetwood was concerned about the poor treatment that black Union soldiers were still receiving after the war. In the years immediately following the war, he repeatedly expressed fears that the contributions made by the United States Colored Troops would fade from public memory and that their heroic deeds would be forgotten.


Examine our school histories, if you please, and you will find very little, if any, reference made to the fact that nearly 200,000 colored men shouldered the musket and went forth to so and die, that the foul blot of slavery might be forever erased from our national banner. 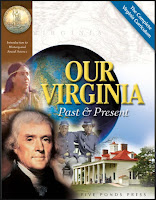 Well, it appears as if the fears of Fleetwood, Brock, and countless others are coming true – at least in Virginia history textbooks. The new 4th grade history book Our Virginia: Past and Present written by one Joy Masoff (who allegedly did most of her research on the World Wide Web) has a section about Black Confederates.

And it’s not just the usual “Oooh, look at this picture of Silas Chandler – see, there MUST have been Black Confederates!” type of palaver – Masoff writes “Thousands of Southern blacks fought in the Confederate ranks, including two black battalions under the command of Stonewall Jackson.”

I could find no mention of whether or not the topic of black Union soldiers is discussed in the book (at least they're on the cover).

Just when the Commonwealth recovers from the Confederate Heritage Month fiasco, this comes to the surface. Troubling, methinks.

For more on the story see here and here.
Posted by Jimmy Price at 12:09 PM