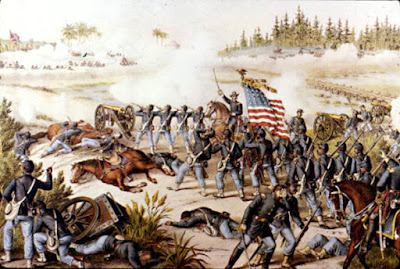 Thus was described the Battle of Olustee, fought on February 20, 1864, by a quick-witted officer in Co. K, 7th Connecticut Infantry. While the battle itself was not one of the finer military exploits produced by the Union war effort during the American Civil War, it did display the fighting prowess of the African American soldiers who fought there.

In early 1864, Federal forces launched their largest military operation in Florida that was a result of both political and military considerations. With the presidential election coming up in November the Republicans hoped to organize a loyal Florida government in time to send delegates to the Republican nominating convention. In addition to the political objectives Major General Quincy Gillmore, stated that the expedition was necessary to “procure an outlet for cotton, lumber, Timber, Turpentine, and the other products of the State… cut off one of the enemy's sources of commissary supplies.” 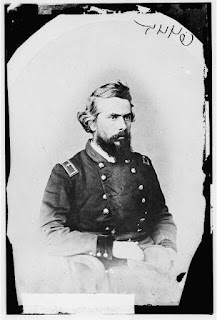 In February, 1864 Gillmore received approval for his plans to occupy Jacksonville with a large force and to extend Federal operations over much of northeast Florida. About 6,000 troops from Gillmore's Department of the South were selected for the operation and on February 7th these troops took Jacksonville. One week later Gillmore met with his subordinate, Truman Seymour who was not held in the highest of esteem by his men. One soldier later described the situation: “The Florida expedition was intrusted to the command of General Truman Seymour, considered by more than the rank and file, as an eccentric West Point crank who aped only Napoleon in prowling around camps at night to watch the men on duty, but he lacked the genius of his prototype in the performance of his own duty.”

Gillmore ordered that defensive works be constructed and appointed Seymour commander of the newly-created District of Florida. On February 19 he assembled his troops in preparation for a movement against the Confederates the next day.

The next day saw confused fighting and when some of Seymour’s white units broke, he sent in the untried men of the 8th United States Colored Troops. The 8th had trained at Camp William Penn in Pennsylvania but had “little practice in loading and firing” their weapons, according to the regimental surgeon. Lt. Oliver Norton of the 8th recalled that after standing up to the murderous fire, his men had to withdraw:

As the men fell back they gathered in groups like frightened sheep, and it was almost impossible to keep them from doing so. Into these groups the rebels poured the deadliest fire, almost every bullet hitting some one. Color bearer after color bearer was shot down and the colors seized by another. Behind us was a battery that was wretchedly managed. They had but little ammunition, but after firing that, they made no effort to get away with their pieces, but busied themselves in trying to keep us in front of them. Lieutenant Lewis seized the colors and planted them by a gun and tried to rally his men round them, but forgetting them for the moment, they were left there, and the battery was captured and our colors with it.

Around this time the two units that were bringing up the rear – the 54th Massachusetts and the 1st North Carolina Colored Volunteers (35th USCT) – arrived on the scene. The 54th raised its sarcastic battle cry “Three cheers for Massachusetts and seven dollars a month!” and went on line. One eyewitness said that they “fought like tigers” while the 1st NCCV “went up into the field, halting and firing fiercely, with its right well forward, so as to form an angle of…120 degrees with the line of the Fifty-Fourth.” With the two black units holding the field, Seymour decided to form a new line farther to the rear and withdraw his other units, which left the 54th and 1st NCCV terribly exposed to the Confederate fire. With their comrades pulling back, there was nothing left for them to do but to withdraw in good order.

The casualties reported by the three black units at Olustee tell the tale better than any eyewitness account ever could. The 54th lost 13 men killed, 65 wounded, and 8 missing. The 1st NCCV (which had officially been redesignated the 35th USCT, yet still clung to its old name) lost 22 killed, 131 wounded, and 77 missing. And, finally, the poor 8th USCT lost 49 killed, 188 wounded, and 73 missing. The Federals as whole would lose 26.5% of their men, making Olustee proportionally the third bloodiest battle of the entire war.

To make matter worse, Olustee was one of the many sanguinary fights in which the Confederates committed atrocities after the fighting had ended.

In passing over the field, and the road ran centering through it, my attention was first attracted to the bodies of the yankees, invariably stripped, shoes first and clothing next. Their white bodies looked ghastly enough, but I particularly notice that firing seemed to be going on in every direction, until the reports sounded almost frequent enough to resemble the work of skirmishers. A young officer was standing in the road in front of me and I asked him, "What is the meaning of all this firing I hear going on". His reply to me was, "Shooting niggers Sir. "I have tried to make the boys desist but I can't control them". I made some answer in effect that it seemed horrible to kill the wounded devils, and he again answered, "That's so Sir, but one young fellow over yonder told me the niggers killed his brother after being wounded, at Fort Billow, and he was twenty three years old, that he had already killed nineteen and needed only four more to make the matter even, so I told him to go ahead and finis the job". I rode on but the firing continued. The next morning I had occasion to go over the battle field again quite early, before the burial squads began their work, when the results of the shooting of the previous night became quite apparent. Negroes, and plenty of them, whom I had seen lying all over the field wounded, and as far as I could see, many of them moving around from palace to place, now without a motion, all were dead. If a negro had a shot in the shin another was sure to be in the head.

The defeat at Olustee ended the Union’s effort to organize a loyal Florida government in time for the 1864 election. Jacksonville would remain in Union hands until the end of the war, although the cost for such a gain was incredibly steep. Still, the positive long-term gains achieved after Olustee can be attributed in large part to the African American soldiers who fought and bled there 147 years ago today.
Posted by Jimmy Price at 8:59 PM