Question of the Day 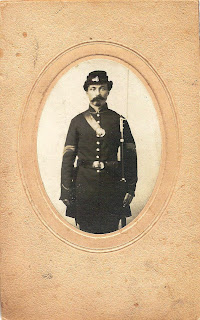 I was at a Civil War relic show over the weekend and, of the myriad relics that I saw that were beyond what most normal human beings could pay in a lifetime ($24,000 for a Le Mat Revolver is but one example) I came across the photograph shown above. It immediately caught my eye, as I thought it looked like an African American soldier, but the vendor who was selling the item did not seem to think that the gentleman in the photo was a USCT. My gut told me that he was, however, so I went ahead and paid a very reasonable price (less than what I spend on groceries) in the hopes that I could do further research and find out just who the gentleman portrayed in the photo is. There’s a handwritten note glued to the back that states that the gentleman is “Uncle Hugh” and the picture was taken “in Virginia during the Civil War 46 years ago when he was 35 years of age.”

All of that being said, I thought I would ask you, gentle readers, what you think.

Does this look like an African American soldier to you?

Are there any distinctive markings that I’m oblivious to that can lead to a conclusive answer?

Whatever the case may be, I’m still very pleased with my purchase and I now have an irrepressible urge to start collecting more period images.

Please don’t tell my wife…
Posted by Jimmy Price at 11:39 AM