The Crooked Road To Appomattox 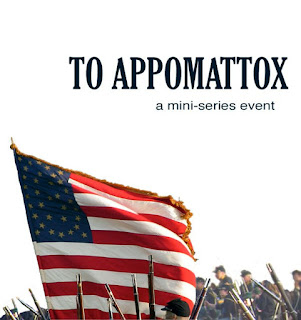 4/18/11 - UPDATE # 2: Historian and fellow blogger J. D. Petruzzi has been called in to serve as an historical advisor for the film. For more, see here.

4/15/11 - UPDATE # 1: From the producer - "Pleased and very honored: reknowned historian, Ronald White--Christopher Award winner for "A. Lincoln: A Biography" and his upcoming Grant biography for Random House, has come on board as a historical advisor and will be paying expert attention to the characterization of President Lincoln." This is a very encouraging development.

A couple of months ago I posted on the upcoming eight-part miniseries To Appomattox, which is being sponsored by NASCAR and gives all of the signs of being a very Lost Cause friendly dramatization of the American Civil War. The entire country music band Rascal Flatts will play varying parts in the film and stock car racer Carl Edwards is slated to portray Confederate General and post war propagandist John B. Gordon. In my first analysis of the project I expressed hesitant hope that the film will strive for accuracy and not fawn over Lee, Jackson, and “the cause” a la Gods & Generals.

Well, now I’ve discovered that the miniseries has a Facebook page which sheds a lot of light on just what we can expect from this production. First of all, it appears that Trace “I ain’t gonna cut my hair til the South gits her rights” Adkins is being approached for the role of Nathan Bedford Forrest. Although Adkins recently stated that he was certain that Confederate soldiers did not fight for slavery, I wonder how he will approach acting out the Fort Pillow massacre, should the filmmakers decide to include it in the film?

Not surprisingly, the movie has already drawn out the die hards. One exchange on the Facebook page reads like this:

Southern Heritage Type: “i truly hope the dignity of the southern soldger is up held they use facts and dont fill it with federal propaganda lets respect our forefathers not ridicule them”

“To Appomattox”: “Thanks...Over my mantle is the portrait of my great great great grandfather Simeon Howard Calhoun, a quartermaster in Lee's Army.”

On the bright side, however, it appears that the miniseries will strive to portray the contributions of United States Colored Troops. When asked, “You will Add USCT troops in this series will you?” the producers responded:

“Absolutely. We follow the story of Captain Andre Cailloux of the 1st Louisiana Native Guard--the first African-American officer in the U.S. Army--from their recruitment and through their heroic service at Port Hudson... We also spend a great deal of time with the tragedy and heroism of the USCT at the Battle of the Crater.”

So country music stars and NASCAR drivers will portray Rebel generals while reasonable folk and loons alike strive to have their voices heard and make sure that the “real” history will make it into the final cut.

Sounds about right for a Civil War movie…
Posted by Jimmy Price at 10:40 PM