The Battle of New Market Heights: Freedom Will Be Theirs By The Sword Now Available For Pre-Order! 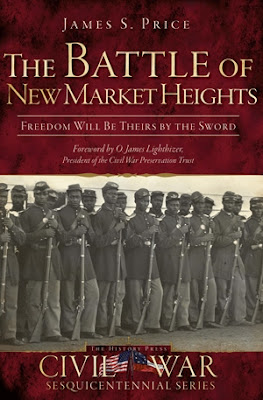 Well, after two years of research and writing I am happy to finally be able to say that my battle history of New Market Heights is now available for pre-order from The History Press! The official release date is September 15th, so if you want to be sure that you have a copy in your hands on that day, be sure to order your copy today!

In the predawn darkness of September 29, 1864, black Union soldiers attacked a heavily fortified position on the outskirts of the Confederate capital of Richmond. In a few hours of desperate fighting, these African American soldiers struck a blow against Robert E. Lee’s vaunted Army of Northern Virginia and proved to detractors that they could fight for freedom and citizenship for themselves and their enslaved brethren. For fourteen of the black soldiers who stormed New Market Heights that day, their bravery would be awarded with the nation’s highest honor—the Congressional Medal of Honor. With vivid firsthand accounts and meticulous tactical detail, James S. Price brings the Battle of New Market Heights into brilliant focus, with maps by master cartographer Steven Stanley.