The tragic and triumphant experiences of Mary Todd Lincoln’s seamstress and confidante Elizabeth Keckley have been the subject of a handful of books over the past 15 years, and they have recently come to life on the big screen with Steven Spielberg’s Lincoln.

While most may be familiar with the narrative of a talented young woman who rose from the horrors of slavery to be a privileged witness to the inner workings of the Lincoln White House, the scene in which a fictional dialogue takes place between the president and Keckley outside the Executive Mansion introduces the viewer to a fact that even I was unaware of – that Keckley had had a son who served in the Union army and was killed in battle.


As soon as that line left Gloria Reuben’s lips, my mind immediately leapt to the obvious question – was this son of hers a member of the United States Colored Troops? After a little digging, I soon found my answer. 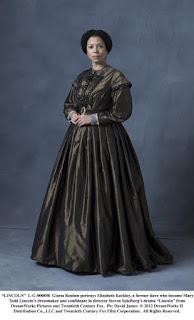 Before delving into the details of the short military career of Keckley’s son, a little background is in order. “Lizzie” Keckley was born into slavery in February of 1818 in Dinwiddie County, near Petersburg, VA. She eventually wound up in Hillsborough, NC where here owner, Hugh Garland, “married” her to his neighbor Alexander Kirkland. This basically meant that she was a concubine and, in her own words, Kirkland “persecuted” her for four years, an experience that was “fraught with pain.” This abusive union resulted in a son being born, whom the father named George. Thankfully for Keckley, Alexander Kirkland died when their son was only 18 months old.


In her autobiography, Behind the Scenes: Thirty Years a Slave, and Four Years in the White House, Keckley had this to say about the situation: “The child of which he [Kirkland] was the father was the only child that I ever brought into the world [she would later marry again – this time of her own volition]. If my poor boy ever suffered any humiliating pangs on account of birth, he could not blame his mother, for God only knows that she did not wish to give him life; he must blame that society which deemed it no crime to undermine the virtue of girls in my position.”
The son, originally referred to as “Garland’s George,” would eventually earn freedom along with his mother when Keckley paid $1,200 for their freedom in 1852. George would grow into a capable boy and go on to attend Oberlin College. By the time of the Civil War however, George – who sometimes went by his middle name William – adopted his father’s last name of Kirkland and enlisted as a white man in the 1st Missouri Volunteers – a 3 month militia unit that would be redesignated the 1st Missouri Light Artillery. He entered the service on April 24, 1861 The 1st was one of several unofficial pro-Unionist Home Guard militias formed in St. Louis in the early months of 1861 by Congressman Francis Preston Blair, Jr. and other Unionist from Missouri. They would elect Blair as their colonel, with Nathaniel Lyon in overall command of the Missouri volunteers.

Kirkland was with the 1st when they went into action at Wilson’s Creek on August 10, 1861, and it was there in the Ray family’s corn field where he was killed. It is unknown if his body was claimed, or if he was buried on the battlefield. If he was buried on the field, he may be in one of the 689 unknown graves at Springfield National Cemetery, where all of the Union dead from Wilson’s Creek were moved after the war.


Keckley received a pension starting in September of 1863 with the help of Owen and Joseph Lovejoy and was paid $8.00 a month until her death in 1907. It is interesting to note that she makes scant reference to George in her autobiography – indeed, she spends a much greater amount of type space devoted to the death of Willie Lincoln, and only references the death of her son to illustrate how she could relate to Mary Todd Lincoln and comfort her in her time of grief. 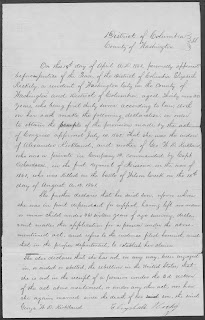 (Note: Keckley was vilified for the intimate details she divulged and the private letters of Mary Lincoln that were included as an appendix to the book. Robert Todd Lincoln, in one of many ugly moments that marked his long life, blocked publication of the book and published his own parody, disdainfully entitled Behind the Seams; by a Nigger Woman who Took Work in from Mrs. Lincoln and Mrs. Davis and Signed with an "X," the Mark of "Betsey Kickley (Nigger) denoting its supposed author's illiteracy.")
In the end, we are left with many questions. Was Kirkland’s choice to join in 1861 a rejection of his black blood or was it simply his way around the fact that he otherwise would not have been able to enlist at the time? Was Keckley’s scant reference to him due to the painful reminder of four years of abuse that her son embodied? Was she angry at him for casting aside his black identity to adopt his father’s name and serve as a white man? We may never know.

As the story of Elizabeth Keckley continues to unravel and new generations are exposed to her remarkable story through Spielberg’s film, we may one day have an answer.
Posted by Jimmy Price at 11:14 PM