The World Turned Upside Down: The Bureau of Colored Troops Established 150 Years Ago Today

A lot can happen in two years.

In 2011, we saw the tragedy in Tucson, a royal wedding, the death of Usama bin Laden, and the official end of the Iraq War. In the ensuing two years we have seen more tragic shootings, another terrorist attack on American soil, and we are watching several scandals unfold that are rocking the administration that was on top of the world after the impressive feat of taking out the world’s most infamous terrorist and ending a controversial war that had cost much blood and treasure.

Yes, a lot can happen in two years.

As we look back at the tumult of the American Civil War, we can see a far more revolutionary transformation that took place over a two-year span.

For the nation that went to war for union in 1861, turning down all offers of African American enlistment and vowing that slavery was not the main bone of contention, underwent a dramatic upheaval that led to emancipation and the event that we commemorate today – the creation of the Bureau of Colored Troops.

Established by General Orders No. 143, the bureau gave former slaves the opportunity to strike a blow for their own freedom. It gave free blacks the opportunity to display their manhood and prove that they were worthy of receiving the full benefits of citizenship. And it allowed white enlisted men the occasion to advance themselves by attending military schools that would make them officers if they could pass the rigorous examination.

Looking back on this chain of events, students of the Civil War can see the inevitability of such a transformation. But for those who lived through it, the world had been turned upside down.

After May 22, 1863, African American soldiers and the officers that led them formed the tip of the spear in the Northern effort to bring about the new birth of freedom by force.

They had moved from the periphery of the war to the very core of it – let us hope the same is true for the remaining months of the sesquicentennial commemoration. 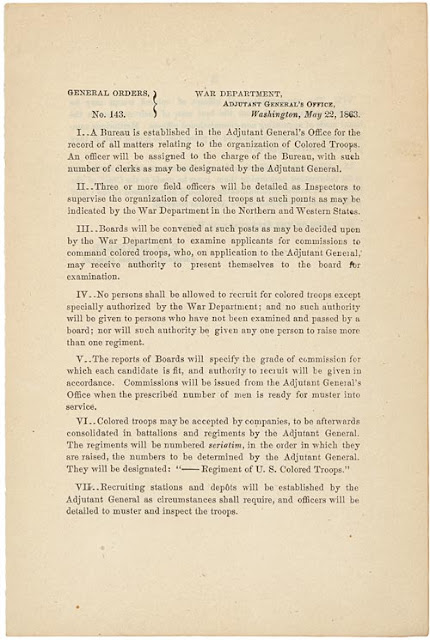