The following is an eyewitness account of Maj. Gen. J.E.B. Stuart’s death on May 12, 1864. Stuart’s adjutant, Maj. Henry McClellan, wrote to Flora Stuart to explain the circumstances of how he was wounded and the manner of his death. Flora had arrived at the home Dr. Charles Brewer on May 12th to find that Stuart had been dead for several hours and was greatly grieved to know that she had just missed a last chance to say goodbye to her beloved husband.

While yet in the ambulance Dr. Fontaine and Lieutenant Hullihen turned the general over on his side, in order that an examination of the wound might be made While this was in progress he spoke to Hullihen, addressing him by the pet name which he usually employed: --

“General,” replied Hullihen, “you are looking right well. You will be all right.”

In order to avoid the enemy, who how held full possession of the Brook turnpike, it was necessary for the ambulance to make a wide detour to reach Richmond, and it was some time after dark when the general arrived at the residence of his brother-in-law, Dr. Charles Brewer. The long ride gave him great suffering. On the morning of the 12th, after delivering General Fitz Lee’s message to General Bragg, I repaired to the bedside of my dying chief. He was calm and composed, in the full possession of his mind. Our conversation was, however, interrupted by paroxysms of suffering. He directed me to make the proper disposal of his official papers and to send his personal effects to his wife. He then said: ---

“I wish you to take one of my horses and Venable the other. Which is the heavier rider?”
I replied that I thought Venable was.

“Then,” said he, “let Venable have the gray horse, and you take the bay.”

Soon he spoke again: “You will find in my hat a small Confederate flag, which a lady of Columbia, South Carolina, sent me, with the request that I wear it upon my horse in a battle and return to her. Send it to her.”

I was at a loss how to interpret these instructions; for I had never seen any such decoration upon his hat. But upon examining it the flag was found within its lining, stained with the sweat of his brow; and among his papers I found the letter which had conveyed the request.

Again he said: “My spurs which I have always word in battle I promised to give to Mrs. Lilly Lee, of Shepherdstown, Virginia. My sword I leave to my son.”

While I sat by his side the sound of cannon outside the city was heard. He turned to me eagerly and inquired what it meant. I explained that Gracy’s brigade and other troops had moved out against the enemy’s rear on the Brook turnpike and that Fitz Lee would endeavor to oppose their advance at Meadow Bridge. He turned his eyes upward, and exclaimed earnestly, “God grant that they may be successful.” Then he turned his head 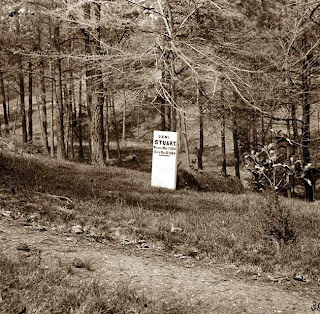 “But I must be prepared for another world.”

The thought of duty was always uppermost in his mind; and after listening to the distant cannonading for a few moments, he said: “Major, Fitz Lee may need you.” I understood his meaning, and pressed his hand in a last farewell.

As I left his chamber President Davis entered. Taking the general’s hand, he asked: “General, how do you feel?”

He replied: “Easy, but willing to die, if God and my country think I have fulfilled my destiny and done my duty.”

The Reverend Mr. Peterkin visited him, and prayed with him. He requested Mr. Peterkin to sing “Rock of Ages,” and joined in the singing of the hymn.

During the afternoon he asked Dr. Brewer whether it were not possible for him to survive the night. The doctor frankly told him that death was close at hand. He then said:

“I am resigned if it be God’s will; but I would like to see my wife. But God’s will be done.”

Again he said to Dr. Brewer: “I am going fast now; I am resigned. God’s will be done.”

And thus he passed away.