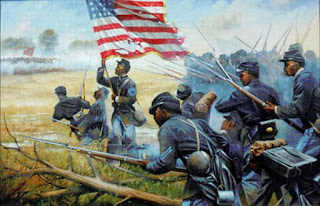 This painting was a part of Dr. Louis Manarin's two volume history of Henrico County during the Civil War entitled Field of Honor. It was painted in 1999 by an artist named Joseph Umble and the copyright belongs to the County of Henrico.

I thought I would share this with you because it is one of a very few recent paintings that I know of that specifically honor the deeds of an African American soldier during the Civil War. While John Paul Strain cashes in on painting every single place that Stonewall Jackson ever visited and other artists make a name for themselves by showing us how easily Lee and Jackson were "moved to tears", this painting stands in stark contrast.

Not only does it honor a singular act of heroism, it also touches upon the enduring legacy of the American Civil War.

If only there were more like it...
Posted by Jimmy Price at 4:38 PM