Be sure to check out the new post over at Mysteries and Conundrums regarding the fighting that took place at the Alrich Farm on May 15, 1864. This was the first combat by USCT’s north of the James River and mainly involved troops from the 23rd USCT. 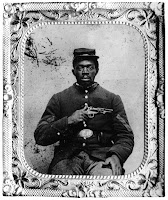 The 23rd was a Virginia unit and many of you might recognize the face of Nimrod Burke, who served with the unit. Burke’s image is by far one of the most iconic photographs of a USCT.
Posted by Jimmy Price at 8:42 PM