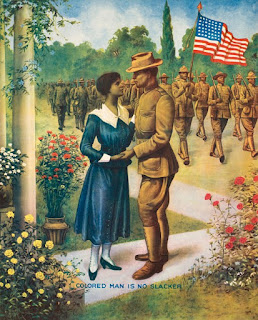 In addition to writing about the American Civil War, I sometimes moonlight as an amateur historian of the First World War. I’m currently working on a WWI exhibit that will be opening this September and will be publishing a history of Richmond during the Great War in 2011.


While conducting research on the African American population in Richmond during World War One I came across a 1922 article entitled “The War Record of Negroes in Richmond, Virginia” which was published in The Southern Workman, a journal published by Hampton Normal and Agricultural Institute (later Hampton University). Expecting to find detailed information on the black response to the draft, I was surprised to read the following in the first paragraph of the article:

The qualities shown by Negro men during the Civil War were found again in the World War registrants. When the test came the Negro went back to his honorable record made in the sixties and not to the years when he was misrepresented and misled politically.

Not thinking much of this slightly rambling prelude, I was taken aback when I read the second paragraph:

The South can never forget the Negro of 1861 to 1865. Actually, if not nominally, the protector of the families and the property of her soldiers, he showed fidelity to his trust and devotion to the white people with whom he lived. There was not an instant during that war when the South’s chance for success was not based on the certainty of the Negro’s devotion to his master’s people. A general uprising, even cause for distrust, would have led, at any stage of the war, to the immediate dispersion of the Army of Northern Virginia.

Needless to say, I was at first baffled at the inclusion of such a paragraph in a journal published by a predominantly African American college.

Then I looked at the bottom of the page and found that this was an excerpt from a report filed by the Report on Selective Service in the City of Richmond, Virginia to the Richmond War History Commission in 1922.

The Richmond War History Commission, of course, was made up predominantly of white Richmonders in a city that was still very much dealing with the legacy of the American Civil War. Tensions boiled over throughout the country during World War One with large race riots breaking out in several major American cities. The situation grew so bad that Gov. Westmoreland Davis actually arranged to have weapons stockpiled in the bell tower at the state capital in case the Ku Klux Klan threatened Richmond’s returning black heroes.

Was the inclusion of a paragraph on the “loyal slaves” of the Confederacy a subtle way of intimating how blacks were expected to behave in the postwar world?

This warrants further investigation…
Posted by Jimmy Price at 11:29 PM