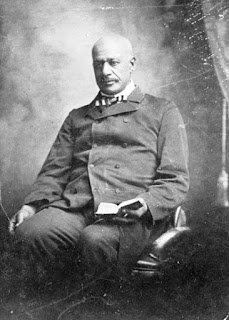 Judging from the positive response that I got back in June when I wrote about the life of Sgt. Maj. Thomas Hawkins of the 6th USCT, I think it’s about time to profile another of the New Market Heights Medal of Honor recipients.

James Daniel Gardner enlisted at the ripe young age of 19 for three years service on September 15, 1863 at Yorktown, Va. Not much is known about his early life, but we do know that he was born a free man in Gloucester, Va. and that his pre-war occupation was gathering and selling oysters.

Gardner was mustered in during the month of October 1863 into what was then part of Edward A. Wild’s African Brigade. The unit he was assigned to was the 2nd North Carolina Colored Volunteers, which was commanded by Alonzo Granville Draper. The 2nd NCCV was organized at New Bern, NC and Portsmouth, Va. and was redesignated the 36th United States Colored Troops on February 8, 1864.

The 36th did not see much action until the latter portion of 1864. The men of the 36th were responsible for guarding Confederate prisoners at Point Lookout in Maryland and did not leave that post until June of 1864. While at Point Lookout they were involved in the alleged rape that some theorize resulted in the massacre at the Battle of the Crater. By early June of 1864 they were sent to join Benjamin F. Butler’s Army of the James at Bermuda Hundred. Their first large battle would be at New Market Heights on September 29, 1864.

Gardner’s unit was part of the Second Brigade – commanded by his old regimental commander Col. Alonzo Draper – of Brig. Gen. Charles J. Paine’s Third Division, XVIII Army Corps. They were initially held in reserve as Col. Samuel A. Duncan’s Third Brigade attacked the New Market Line with horrific casualties. As the remnants of Duncan’s Brigade fell back Paine called for Draper’s Brigade to traverse the same ground and break through the Confederate defenses.

As the sun began to rise and the fog began to lift, the men of the 36th had the advantage of being able to see their objective – a luxury that Duncan’s men did not have. As Draper’s Brigade moved forward they were forced to step over ground that was littered with the dead and wounded from the first assault. As they neared the Rebel works, they became entangled in the slashing and abatis that had slowed down the first assault.

Draper described what happened next:

After passing about 300 yards through young pines, always under fire, we emerged upon the open plain about 800 yards from the enemy's works. Across this the brigade charged with shouts, losing heavily. Within twenty or thirty yards of the rebel line we found a swamp which broke the charge, as the men had to wade the run or stream and reform on the bank. At this juncture, too, the men generally commenced firing, which made so much confusion that it was impossible to make the orders understood. Our men were falling by scores. All the officers were striving constantly to get the men forward. I passed frequently from the right to the left, urging every regimental commander to rally his men around the colors and charge. After half an hour of terrible suspense, by starting the yell among a few, we succeeded in getting them in motion. The entire brigade took up the shout and went over the rebel works. When we reached the palisades the rebels fell back to the woods on the side of Signal Hill. 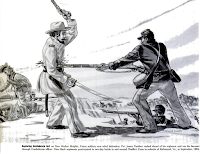 During this furious onslaught, Gardner ran ahead of his unit and shot a Confederate officer who was standing on top of the works. After shooting the officer, Gardner ran him through with his bayonet for good measure. This act alone would earn him a promotion to sergeant and two prestigious honors – the Butler Medal and the Medal of Honor.

The company Muster Roll for Company I, 36th USCT recorded:
“Promotion to Sgt for heroic conduct to date Sept 30 1864”

Apparently, however, youth got the best of Sergeant Gardner and less than a year later the Company Muster Roll recorded an altogether different state of affairs:

After the war, Gardner moved with his regiment westward to the Texas frontier, where his service was marred by disciplinary problems. He was reduced in rank to private “for incompetence and for being slovenly and dirty in his habits” and was placed in confinement in Brazos Santiago on March 29, 1866. 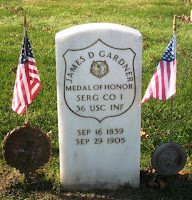 What started as a promising career ended in disappointing obscurity. However, that was not the last the world would hear of James Gardner. After being discharged from the army on September 20, 1866 Gardner became a missionary for the Catholic Church. The photograph above shows Gardner around the time of the 1900 Paris Exposition – just five years before he passed away. When Gardner died in 1905, he was living in Clark’s Summit, Pa., although he was buried in Calvary Crest Cemetery in Ottumwa, Iowa.

On May 6, 2006 my friend Wes Wilson, who portrays Gardner, helped to get a monument dedicated in Gardner’s honor.

It can be seen at Gloucester's court circle and – hopefully – will be visited frequently during the Sesquicentennial commemoration. 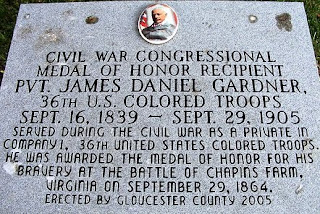