“Take Our Stand” Heads to the Coast Guard Academy 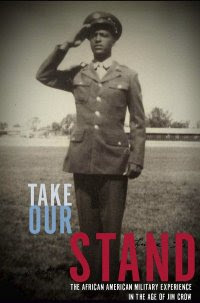 I can still vividly recall where I was around this time three years ago – sitting inside the cramped confines of the parking booth at the entrance to the American Civil War Center at Historic Tredegar, frantically typing away at the first draft of an exhibit script that I thought would never get finished. At the time I was in the midst of getting my MA in Military History and working at Tredegar doing all sorts of odd jobs (education, interpretation, artifact installation, collections cataloging, changing light bulbs – you name it). The parking booth was the one place where an employee could go to concentrate and get some work done, so that’s where I spent the majority of my time. (If you were at the front desk you had to deal with those pesky visitor things, and they just got in the way.)

If you’ve never written an exhibit script before, it’s very similar to writing a term paper or long essay. In other words, it’s pretty stressful. You have to find the perfect balance of giving a concise overview and knowing when it’s appropriate to delve into more specific details. You’re always questioning what to include and what to exclude. The constant fear looming over your head is that you’re going to find a firsthand account or photograph that perfectly illustrates the point you’re trying to make after the exhibit has already opened. With all of this circulating through my brain, I worked right up to the deadline and submitted the first draft, reasonably satisfied that what I had written was a good starting point. At that time no funding had been found for the exhibit, so once the first draft was submitted I went back to my normal work routine and waited for the next phase of work to start up.

As it turned out, I had moved on to another museum job by the time that Tredegar had gotten enough grant money to start producing the final exhibit. With my portion of the work finished and with new job responsibilities at hand, the exhibit (which had a working title of “To Show That We Are True Americans”: The African-American Military Experience in the Age of Jim Crow – I like long titles) slowly faded from my mind...

Fast forward to February 19, 2010 and I am standing at the opening reception for Take Our Stand: The African-American Military Experience in the Age of Jim Crow, amazed at the finished exhibit produced by the staff at the ACWC. To be recognized in public for work on this exhibit was an amazingly gratifying experience, and I am proud to say that the exhibit has been displayed at the Black History Museum & Cultural Center of Virginia, the Richmond Public Library, and has recently opened at the United States Coast Guard Academy where it will be on display through December of 2010.

While I certainly can’t claim credit for much of what makes this exhibit that RVANews called “just across-the-board fascinating” great, I am immensely proud of the part that I played in its production. If the exhibit comes to a city near you, do yourself a favor and go check it out.

And stay tuned for an update on my new exhibit Ready To Do My Part: Henrico County & World War I, opening September 16th. I pretty much did all the work on this one (and have the gray hair to prove it).