A Grand Review Indeed, Part I

Well, as most of you know I had the distinct pleasure of attending the festivities relating to the recent United States Colored Troops Grand Review Weekend in Harrisburg, PA.
I have to say, out of all of the events, lectures, and symposiums I’ve been to over the past few years, this one ranks right up there with the time I arranged to meet with the family of one of the New Market Heights Medal of Honor recipients. The three events I attended – the symposium “Rather Die Freemen than Live to be Slaves”, the White Carnation League Dinner, and the review itself – all exceeded the expectations I had when I decided at the last minute to make the trek up to my state of birth.
The first event that I attended was the aforementioned symposium which was sponsored by the Historical Society of Dauphin County, the Pennsylvania Humanities Council, and Pinnacle Health System. Things kicked off around 9:00 Friday morning and as the day progressed I was in constant amazement that this event was free.

This first speaker was Dr. James Horton, professor emeritus at George Washington University who spoke on the topic of “Slavery: The Great American Contradiction”. Much of this material was similar to what Dr. Horton spoke about at the Virginia Sesquicentennial Committee’s Signature Conference on Race and Slavery back in September. At the conclusion of his talk Dr. Horton mentioned that he is in the process of editing the diary of a soldier who served in the 8th USCT, which should be an incredible read to say the least. He also mentioned some fascinating research he is conducting on soldiers from what is now Hawaii who served in the Union army.

The next speaker was Hari Jones, who serves as the Assistant Director and Curator for the African American Civil War Museum & Memorial in Washington D.C. If you’ve never heard Hari speak before, do yourself a favor and find out where he’s speaking next and go see him. You will not regret it. His riveting presentation entitled “The USCT and Pennsylvania” traced the origins and history of all of the USCT units raised in that great state (the 3rd, 6th, 8th, 22nd, 24th, 25th, 32nd, 41st, 43rd, 45th, and 127th in case you were wondering). Jones made a point of challenging some of the standard themes that get repeated over and over again (i.e. black soldiers were paid less than whites for the whole war, USCT units always got the dirtiest jobs dished out to them, etc.) and instead painted a picture of some elite, veteran fighting units that had earned the respect of their leaders and who could not attend the Grand Review in Washington because they were busy “finishing the job”. It was a very stirring lecture and was a highlight of the day for me.

Following Jones was Dr. Richard Blackett of Vanderbilt University who gave a fascinating talk on Thomas Morris Chester – a key organizer of the Pennsylvania Grand Review and the only African American war correspondent who wrote for a white newspaper (under an assumed name of course – Chester’s readers did not know he was black when they were reading his words). Chester wrote some great stuff on New Market Heights that will be featured in my book, but one thing I didn’t know about the man was that he was a lifelong proponent of colonization to Liberia and made numerous trips there during his lifetime. It turns out he fathered a son in Liberia and continued to support colonization even after the war was over.

The last presenter was Dr. James Paradis of Doane Academy who wrote a wonderful book on the 6th USCT called Strike the Blow for Freedom, which I highly recommend if you don’t already have a copy. Paradis chronicled the history of the 6th from its time at Camp William Penn in Philadelphia to its storied fighting history at Petersburg, Richmond, and Wilmington. He spent a good amount of time on New Market Heights, where the 6th lost roughly 57% of its strength. 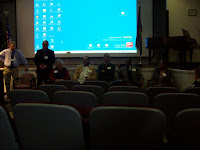 At the end of the symposium the presenters came to the front of the room and entertained questions from the audience for about 45 minutes. All in all, it was a wonderful, scholarly event.

That evening I attended the White Carnation League Dinner, where I was honored to meet numerous descendants of USCTs. One woman in particular had an ancestor who served in the 22nd USCT (which was at New Market Heights) and I was fascinated to see that she had his picture and some of his army records with her. It’s not every day you get to see stuff like that. I also had the good fortune of being placed at the same table as Hari Jones and Dr. Blackett, who provided some fascinating table conversation!

The next morning was the review itself.

More on that coming soon…