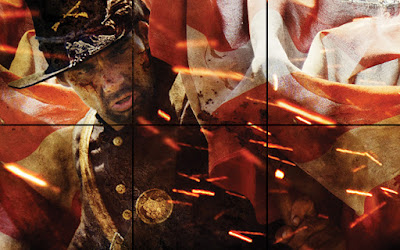 A couple days ago I received an email from someone at “History” (formerly the History Channel) asking if I would promote their upcoming two hour spectacle Gettysburg, produced by Ridley Scott (Alien, Black Hawk Down) and his brother Tony (The A Team, Pillars of the Earth). The person from “History” even offered a wide assortment of goodies in compensation for my blog space, including high-end items like t-shirts and hand bags.

With such a tantalizing deal before me (I mean who wouldn’t want a white t-shirt with a big “H” on it?), I wisely listened to the little voice in the back of my head that asked, “Yes, but what if you end up hating it?” and ended up turning down the offer.

Needless to say, it’s a good thing I did, because I can now offer you a lighthearted post on how some of my more vociferous and passionate friends on Facebook responded to what turned out to be a disappointing film on many, many levels.

Here’s a sampling of what some folks are saying about Gettysburg that had me writhing with laughter.

"This Gettysburg thing is bizarre! Bad uniforms, beards, hats etc. No one seems to fight in formations. The Rebs apparently all fought in their shirtsleeves. The Rebel yell sounds like a bunch of radical Muslims."

"Calling it putrid is an insult to all of the rotten things in the world."

"The best thing has been the warning when the show comes back after commercials: "Some scenes may disturb viewers". I find the whole damn mess pretty disturbing."

"I think they bought much of the props at the gift shop."

“Ron Maxwell, you have been vindicated! At least you knew that Lee’s men wore coats, you didn’t try to show sweeping forestry scenes that were reminiscent of the Lord of the Rings trilogy, and you didn’t annoy us with sidebars about the Underground Railroad and the invention of the telegraph. And who in their right mind would’ve thought that the fake beards you used would be shown to be superior?”

Now, in all fairness, I should point out that the historians who were chosen to provide the commentary did an excellent job (it was great to finally see my friend Hari Jones on the History Channel). It was the pairing of such excellent scholarship with awful Hollywood antics, however, that made the film seem disjointed, confusing, and supremely unfulfilling.

Kudos to “History” for trying to contribute to the Sesquicentennial commemoration by seeking out high-end Hollywood producers to help generate interest in America’s greatest conflict.

And here’s to hoping that they never do it again.
Posted by Jimmy Price at 12:05 AM