THIS JUST IN: Glenn Lafantasie Doesn’t Like Civil War Re-enactors 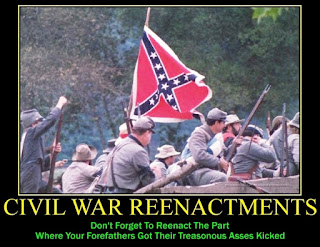 If I was a Civil War re-enactor and I happened upon Dr. Glenn W. Lafantasie’s Sunday article over at Salon.com entitled “The Foolishness of Civil War Reenactors,” I think I might have been offended.

I am a Civil War re-enactor and I was offended.

In a meandering article that covers the controversial events that took place during the Fort Sumter commemoration last month, a spiteful dressing down of just about every re-enactor who has drawn breath since 1865 (the good doctor doesn’t seem interested in balancing his portrait with re-enactors who are sane, well-adjusted individuals presumably because he doesn’t think they exist), a brief overview of Lafantasie-approved reading on the conflict, and a lament over the month-old sesquicentennial, Lafantasie succeeds mainly in sounding like one of those out of touch academics that Southern heritage types are always crowing about.

He stumbles right out of the gate when he tries to give us “normal folk” a helpful definition of “what living history means.” Living history involves people “dressing up in Union and Confederate uniforms and acting out battles and other significant events that occurred between 1861 and 1865.” Not quite true – living history events are usually more casual happenings with no recreated battles in which the detested re-enactors set up camp and demonstrate life on the field and on the march. A battle re-enactment is an event where a specific battlefield scenario is recreated, such as the one that happened at Fort Sumter to Lafantasie’s everlasting outrage.

Many folks who have been in the hobby a while (myself included) will tell you that they prefer living history events because they are more laid back and offer better opportunities for interacting with the public. “Powder burning fests,” as they are sometimes called, tend to attract the subspecies of re-enactor commonly referred to as a “yahoo.” This type of re-enactor cares little for authenticity and wants to shoot his musket as often as he can so that his childhood fantasy of being Josey Wales will finally be realized. I suspect that this is the type of person that Dr. Lafantasie has so much pent up annoyance over.

As the article chugs right along, Lafantasie becomes more shrill in his denouncement of re-enactors, with statements like this – “I confess to some unease about all this playacting as we look down the road to four years of battle reenactments, fancy-dress balls (modeled on the ones portrayed in the films “The Birth of a Nation” and “Gone With the Wind”), and professions of neo-Confederate sentiments about the war having been fought over states’ rights and not slavery, as if that’s a good thing.”

Well, I shouldn’t need to point out that not every re-enactor out there thinks that such a commemoration would be a “good thing.” I guess in Lafantasie’s world there are no Union re-enactors at all, just long-bearded country folk running around shooting at the air and cursing that tyrant Lincoln. Ramping up his rhetoric, he states that re-enactors “live and breathe the war readily, without hesitation, and with a passion that veers close to a religious experience or even sexual arousal.” All of this “strikes [him] as perverse,” and I must admit that if I ever attend an event where re-enactors are flaunting their sexual arousal, I will be the first one to lead a bayonet charge back to the parking lot and fight my way out at all costs.

As the article continues to develop, the author makes more broad, sweeping statements that prove his lack of familiarity with how the hobby actually works and while he decries the violence that these battle re-enactments allegedly celebrate, he also criticizes them for being bloodless, snarkily describing how “the faux dead and wounded on the field rise up in a mass resurrection resembling the Rapture.” Unless Lafantasie wants real combat fatalities to occur at re-enactments, I’m fairly sure that this is unavoidable and the spectators (who Lafantasie also throws under the bus, comparing them to fans of professional wrestling) really are intelligent enough to draw distinctions between the modern day and 1861.

What really caused me to take issue with this article, however, is his characterization of African Americans. Consider this analysis:

“I’ve never attended a reenactment where the Confederate encampments are replete with compliant African-Americans portraying the slaves who actually accompanied their masters – officers and enlisted men – on the march. No doubt it’s hard to find modern African-Americans willing enough to play slaves alongside white Americans playing Confederate soldiers…It’s telling, of course, that African-Americans don’t often attend Civil War battle reenactments…For good reason, modern blacks are a little sensitive about slavery and anything that seems to suggest – as reenactments most assuredly do – that the Civil War was all about battles, that each side fought with equal courage and grand moral purpose, and that the war had nothing to do with slavery or emancipation.”

Is this all that can be said of how African Americans conceptualize the Civil War? Are camp slaves and contrabands the only opportunities available for any black person who would like to participate in a re-enactment? Does Lafantasie realize that over 179,000 African Americans served the Union cause as United States Colored Troops and that there are re-enactment units that exist to strive to portray these units? (I should know – the unit that I belong to is the 23rd United States Colored Troops.) Apparently USCT re-enactors have no place in Lafantasie’s framework, leaving his readers with the impression that African Americans have nothing to celebrate when it comes to the history of the conflict that freed 4 million of their ancestors. As he cynically notes, “one might successfully argue that the ‘new birth of freedom’ Lincoln hoped for never came about.”

Throughout the article, Lafantasie suggests venues other than Civil War re-enactments where people can come and learn to truly appreciate the history of the Civil War. He rightly suggests that National Parks are a good place to start. But doesn’t Lafantasie know that the NPS relies on re-enactment units on a regular basis to bolster their programs? Attend the wonderful living history weekend held by Richmond National Battlefield at Cold Harbor one June and you will see what I mean.

The article mercifully ends with a nearly incoherent rant about birthers, the Tea Party movement, and immigration reform which is sure to earn him points with some of his fellow academics while leaving the rest of us to think that all Civil War re-enactors are right wing racist lunatics hell-bent on destroying the “true” legacy of the Civil War.

For someone who seems to have such righteous indignation over people who lump entire groups of individuals into one category and discriminate against them, that is exactly what Lafantasie has done with Civil War re-enactors.

Respected re-enactors who are still with us like Greg Urwin and Dana Shoaf, in addition to those who are no longer with us like Chuck Hillsman and Brian Pohanka stand out as sterling examples of re-enactors that don’t fit Lafantasie’s mold.

And, like it or not, re-enactors will play a large role during the sesquicentennial commemoration. Perhaps it would be best to ensure that only the most respected re-enactment units out there are invited to participate in important events rather than denigrating them all because of one event that took place in Charleston last month.

But what do I know?