Brushing Up Against History

As you all know, it’s one thing to read about an event for an extended period of time and ponder its various meanings. It’s quite another to come into contact with its direct legacy.

When you think about New Market Heights, you think about courage in the face of adversity, a chance to right wrongs, a neglected display of valor, and an important step in the overall march to Federal victory. 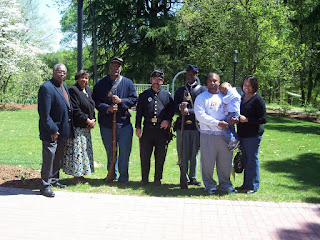 But yesterday I came in direct contact with the legacy of this symbolic fight when I met five descendants of Sgt. Edward Ratcliff. Ratcliff was a Virginia slave who abandoned his master to put on Union blue, eventually becoming a sergeant in Company C of the 38th USCT. He was also one of the “Forgotten Fourteen” who won the Medal of Honor for taking over command of his company and being the first man to enter the Confederate works on September 29, 1864.

(Above: Members of the re-created 38th USCT pose with the descendants of Edward Ratcliff.)

After the war, Ratcliff became a farmer in York County, VA where he lived out the rest of his days, dying at the age of 80 in 1915.

And after that, the memory of New Market Heights, the contributions of African American soldiers, and the fact that there was a Medal of Honor winner among the black community in York County began to fade from memory. As time drifted away, so too did the Ratcliff family (at some point along the way even the spelling of the last name changed to “Radcliffe”).

As one descendant told me yesterday, Sgt. Ratcliff’s granddaughter constantly regaled family and friends with the stories of her grandpa, the hero who won a medal of honor. Apparently, she told the story so many times that people began to doubt her and as the Reconciliation narrative of Civil War history slowly took over, who could blame someone for being dubious about a black man winning the Medal of Honor during the Civil War?

Did black men even fight in that war?

Thankfully the family has begun the process of reuniting and looking back at their heroic ancestor. There’s even a rumor that a distant family member living up north has Ratcliff’s Medal of Honor.

All I know is that relating the history of the Battle of New Market Heights to the Radcliffe family was a once-in-a-lifetime opportunity and I am thankful I had the chance to do so.

It is my hope that I can keep in touch with the Radcliffe’s and incorporate them into the Sesquicentennial Commemoration that has already begun. As more and more people find out about the battle at New Market Heights and the men who fought there, we inch closer to the day when talk of preserving and interpreting the battlefield becomes a reality.
Posted by Jimmy Price at 3:07 PM