What Kind of Commemoration? 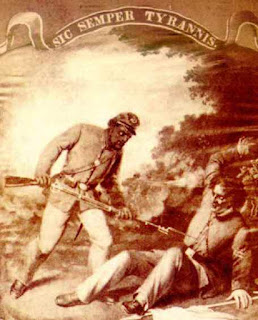 While I realize that doing a Google search is hardly a scientific survey, my curiosity got the best of me today and I decided to go ahead and type in “usct sesquicentennial” just to see what would pop up. What I found was interesting, to say the least.
One of the first things that popped up was Joe Certaine’s latest blog post about the Descendants of Jubilee Project’s efforts to have the United States Colored Troops awarded a Congressional Gold Medal for the vital role they played in bringing about Union victory.

Next was some information from the website of The United States Colored Troops Living History Association followed by a neat site offered by the Arkansas Sesquicentennial Committee listing USCT regiments that were organized in that state.

Next came this blog, which made me happy.

What I read a few entries down, on the other hand, did not make me happy.

Apparently Dixie Outfitters, in addition to manufacturing fashion atrocities, has taken up the writing of “history”. On their page I found an “historical essay” entitled “The USCT in Combat” which says, in part:

To listen to modern day historians, one would think that the Confederate army had a take-no-prisoners policy when it came to black union soldiers and that the always courageous/always well-behaved USCT won the war for the Union. We are bombarded about stories of confederate atrocities perpetrated against United States Colored Troops, but we seldom hear anything about the behavior of the USCT themselves. We are left with the impression that the USCT were brave and well behaved and of course, were cruelly discriminated against by their opponents simply because of their color. While it is common these days for neo-abolitionist historians these days to criticize our “Civil War Memory”, it would appear that they have some memory deficits of their own.

It turns out that this was reposted from the website of the Georgia Heritage Council – get this – IN HONOR OF BLACK HISTORY MONTH!!

Other entries in the series included titles like The USCT at the Crater – ‘No Quarter to the Rebels’?,The USCT as Prison Guards, and – my personal favorite – The USCT – Yankees Behaving as Yankees often do – Badly!

So it would appear that the diehard wing of the SCV/Lost Cause crowd has stooped so low as to try and defame and slander members of the United States Colored Troops. Personally, I’m not very worried about this as the influence of such “heritage groups” does not extend very far beyond its own supremely irrelevant circle. Cherry picking “bad” behavior from The OR can be seen clearly for what it is for most reasonable people.

What is slightly more alarming is that this was the 9th entry on the first page of my Google search.

For the Sesquicentennial Committee that I belong to, I’m confident that United States Colored Troops (both good and bad – and watch out for the ones who guarded prisoners, whew doggies!) will figure prominently in the commemoration.

It is my hope that other committees can and will make the same claim. If you belong to a committe that is doing so, feel free to share your events on this blog.
Posted by Jimmy Price at 4:41 PM