While the last USCT units were not mustered out of Federal service until 1867, a portion of their mission came to a dramatic close on April 3, 1865 when units of the newly created 24th & 25th Corps (all United States Colored Troops) proudly entered the Confederate Capital. Amongst those entering the city was Colonel Alonzo Granville Draper, who had led the second assault at New Market Heights that successfully broke the Confederate line.

Draper recalled of the momentous occasion:

A vast multitude assembled on Broad Street, and I was aroused amid the shouts of ten thousand voices, and proclaimed for the first time in that city freedom to all mankind. After which the doors of all the slave pens were thrown open, and thousands came out shouting and praising God, and Father, or Master Abe, as they termed him. In this mighty consternation I became so overcome with tears that I could not stand up under the pressure of such fullness of joy in my own heart.

One of the incidents that Draper was referring to was the freeing of all of the slaves kept penned up in Lumpkin’s Slave Jail. Robert Lumpkin, one of the leading slave merchants in Richmond and the namesake of the infamous jail, had attempted to get the slaves in his posession out of Richmond during the evacuation. The train that he attempted to put them on was the same one that spirited Jefferson Davis and other Rebel leaders out of the city. Thus, Lumpkin marched his slaves back to the jail, where they would be freed by USCT’s just hours later.

Among the densely crowded concourse there were parents looking for children who had been sold south of this state in tribes, and husbands came for the same purpose; here and there one was singled out in the ranks, and an effort was made to approach the gallant and marching soldiers, who were too obedient to orders to break ranks.

While the African American population of the city was rejoicing, the other inhabitants of Richmond were watching their world turn upside down. Fannie Walker, a copying clerk in the Confederate Bureau of War, lived through the nightmare of the evacuation fire only to emerge the next day to see a member of the United States Colored Cavalry exclaim, Richmond at last!

As it turned out, Walker had little to fear as these men and their white counterparts were quickly put to the task of putting out the remaining fires that threatened the city.

145 years ago today, Richmond was no longer the Rebel capital. Instead, it was one of the first cities forced to deal with the new paradigm shift brought about by Union victory. 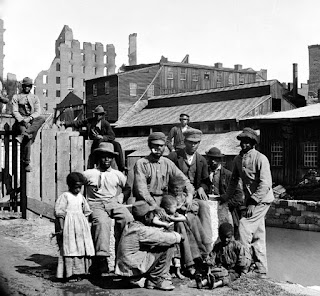