Fun in the [Blistering] Sun

This past Thursday I had the honor of helping give a tour of the New Market Heights battlefield for around 40 park rangers from several NPS sites throughout Virginia. The host for the event was Richmond National Battlefield and, in addition to touring New Market Heights, the group also hit the recently preserved land associated with the First and Second Battles of Deep Bottom, fought in July and August of 1864. Despite the scorching heat, the group seemed to enjoy my tour and I was lucky enough to be able to tag along to see the Deep Bottom battlefields. The main themes stressed throughout the day dealt with the problems associated with preserving core battlefield land – from angry locals who refuse to admit that a battle took place on their land to dilapidated homes that would cost huge sums of money to renovate and repair, we all learned how difficult and complicated preservation can be. By looking at three important battlefields that have been saved but lack any interpretation, the group walked away with much food for thought.

I’ve attached some pictures below (courtesy of NPS Ranger Susie Sernaker) of my portion of the New Market Heights tour. Behind me you’ll see one of the huge hurdles to interpreting the site – a large gravel pit that was filled in with water smack dab in the middle of the killing fields. The area behind me was the ground over which Col. Samuel A. Duncan’s Third Brigade advanced on the morning of September 29, 1864. Obviously, any public interpretation of the site will have to find a way to deal with such an obstacle. As the Sesquicentennial moves forward, it is my hope that I will have more news to report on the public interpretation of New Market Heights. 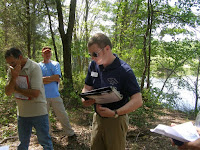 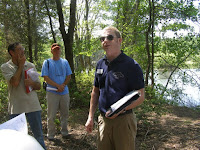 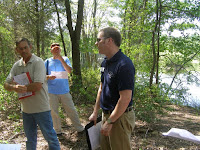