A Newspaper Account of the Battle of the Crater 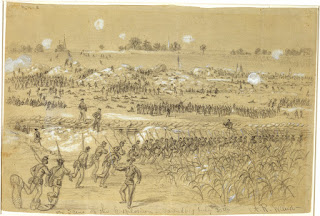 The following comes from the August 12, 1864 edition of The Liberator. The eyewitness accounts of the fighting that took place 146 years ago today are vivid and chilling and the commentary by the reporters is equally enlightening for understanding how the Northern public learned about this battle.

H A O T P, Aug. 1. P.M. A flag of trace was allowed by the rebels from nine until five o'clock this morning to bury the deed and relieve the wounded. Very few were found alive. Most of those living yesterday died last night. Not more than a dozen were brought in, and but few of these were expected to live.

About 190 yards in front of the fort blown up were covered with dead, mostly colored. I counted 150 of the latter and 50 whites, all of whom were buried on the spot. The reason of the great disparity between the white and colored troops it owing to the fact that the fire from the rebel guns, on both flanks, was concentrated upon this ground after the white troops had charged across it; when the colored troops crossed the spot, they were actually mowed down with grape and canister, and when they retreated, they tell in dozens, our sharpshooters being unable to disturb the rebel gunners.

The work of burying the dead was not completed until half part ten, when the truce ceased.

The rebels buried their dead on their side of the line, and carried their wounded to the rear. They claim to have 1200 prisoners, including the wounded. They state that their loss was about 800, but this is not credited, as in charging to recover the works they lost heavily.

Gen. Bartlett and Col. Marshall are prisoners in Petersburg, unhurt.

S A T C On arriving at the exploded fort, our troops found it a heterogeneous mass of loose earth, guns and gun carriages, dead and wounded gunners, &c. Some of the gunners were burled alive, at the depth perhaps of twenty feet—the depth of the mine below the fort. Those on the surface were found in every conceivable condition and attitude—some merely stunned and slightly wounded, others unrecognizable lumps of flesh and dirt; some with their heads protruding from the ruins, others with their heels marking their unhallowed burial place. One poor fellow, pulling the dirt out of his eyes, in his delirium, said: "Have we been attacked? Are we driving them? Thai's right! Give them hell!" He soon revived, however, to find himself a prisoner. Another, buried up to his armpits in loose dirt, on being approached, cried: "Come, Yanks, for God's sake, take me out of this piece! It's all over now, and there is no use letting a fellow slick here. Come, take me out quick, and I will do as much for you some time." He was taken out.

One of the charging officers, noticing the dirt move near him as if a mole or gopher were at work under it, commenced digging, and finally dug out a rebel lieutenant, who was actually revived, and conversed freely with the officers before being brought from the ground. Several others were exhumed from their living graves and restored to consciousness, and will survive.

☞Bennett's infamous Herald , in a characteristic article on the repulse at Petersburg, makes the following blackguard attack upon the colored soldiers, whoso loss in killed and wounded was fearful:—

"But it is not only the incompetency of two generals that we are to blame fur the attempt that ought to have given us possession of the rebel city. We must blame also the President and his whole Cabinet, with his nigger-worshiping policy. They who have insisted, against all opposition, that the niggers should enter the army, are even more to blame than all others. Niggers are not fit for soldiers; they can dig, and drive mules; they cannot and will not fight. All the sensation stories in the nigger papers to the contrary are mere moonshine. They never have fought well in any battle. To insist that the niggers should be in the army was to insist that there should be a weak point in every line of battle with which we faced the enemy; and the enemy found that weak point on Saturday last. Abolitionism is, therefore, the real difficulty now, and unless the President soon finds out how to do away with this difficulty, he may be sure that the people will find out how to do away with him. His Cabinet is the trouble, and unless he changes it, he must go with it in disgrace. He cannot possibly have any hope to end the war with that Cabinet as it now stands, with its "to whom it may concern" policy, its niggers, its apathy, and its shoddy corruptions. But let him form a new one, with Charles Francis Adams, John A. Dix, General McClellan and Admiral Dupont in the chief places, and he may once more rally the country to his support."

In the same number of the Herald, its army correspondent renders a very different verdict—as follows:

"In rear of the main column of attack, the colored division had been formed with a view to passing the other divisions, when they had gained the outer line, and making this a starting point for the continuance of the charge. The first division held the centre, with the second and third on either flank, and now the fourth advanced beyond. The troops were in two columns, each brigade constituting a column. Their splendid discipline could not but be observed, and in the early part of the contest no soldiers behaved more gallantly. They charged upon the next and an interior line of the enemy, and for a time gained decided advantages, as is attested by two rebel battle flags which they captured and brought off with them. But the rebels, exasperated as we know them now to have been at sight of the negroes, fought with the fury of devils, and reinforcements coming to their aid—our signal officers counted six brigades hurried from a camp beyond the town—the tide of battle turned. The colored troops gave way, broke in confusion, when the rebels having repulsed their charge, charged them in turn, and then they ran, a terror-stricken, disordered mass of fugitives, to the rear of the white troops In vain their officers endeavored to rally them with all the persuasion of tongue, sabre and pistol. Whatever of discredit attaches to the troops themselves, their officers are beyond reproach."

Another eye-witness of the desperate but fruitless struggle testifies as follows:—

On came the rebels in four lines of battle, and the negroes had hardly tumbled into our lines of trenches before the battle flags of several rebel regiments were planted on the sides of our trenches. Two big negroes had jumped down on my shoulders, one had trampled me to the earth, and everybody's experience seemed to be the unit as mine. A grand rush to the rear of this line of trenches came on, and heads, arms, legs, black and white, all seemed to point in that direction. Under such circumstances a panic was inevitable. Our officers tried in vain to rally the men, but it was useless until they had retreated back toward the fort where the second trench intersected the first. There a few brave officers and men held the rebel column at bay nearly an hour, but no reinforcements coming, they 'were at last overpowered and surrounded, and the retreat to the fort was very difficult. The colors of the 17th South Carolina were planted over the bank beside the writer, who, with another officer, was seized by a rebel officer.

At that moment the rifle of a dark son of Africa cracked, and the rebel officer was shot through the head, and fell headlong into the pits. Our while officers then shouted to the colored men, "Show 'em no quarter!" "Remember Fort Pillow!" and the negroes in the very teeth of the rebels as they poured over the pits commenced fighting, and no deeds of valor, not even at Thermopylae, surpassed what followed. The negro sergeants and corporals shouted, "Fight, boys, for de country dat ye lub!" and they pitched into the Johnnies with the bayonet, and the clattering of cold steel was then heard on every side. They would use the butt of the musket when too close to use the bayonet.

Just previous to this scene of carnage, the Adjutant of the 31st Maine Volunteers lumped into the advance, and rushed upon the rebels, crying, "Come on boys." He fell mortally wounded, and was carried off to the hospital. Capt. A.J. Hough, commanding 9th N.H. Volunteers, leaped toward the front, trying to rally the white men who were mixed in with colored men, but was shot, and died in a few moments. He was of our bravest and best officers, always in front of his regiment, and noted for gallantry in action. Col' Wentworth of the 32d Maine, and Col. Howard (formerly of Massachusetts) of the 2d Maryland, fell near each other previous to this, both severely wounded. Lieut. Cheney and Lieut. Green of the 9th N.H. Vols., fell wounded; also Cape. Tilton, commanding 11th N.H. Vols., about the same time. Lieut. Drew, 9th N.H. Vols., was taken prisoner, and Lieut. Sampson of the him regiment was taken prisoner, but afterwards escaped, and is believed to be killed. Word was passed in at this rime that the First Division, Ninth Corps, had mostly retreated, and in commander, Gen. Ledlie, was a prisoner.
Posted by Jimmy Price at 11:52 AM