The Art of Rick Reeves

A few weeks ago I posted a print of Christian Fleetwood of the 4th USCT saving the colors at the Battle of New Market Heights – an act that won him the Congressional Medal of Honor.

In that post I bewailed the lack of popular Civil War art devoted to the exploits of the USCT’s. This is due to the fact that most Civil War artists put their efforts into paintings that show every single place that Lee & Jackson stopped to relieve themselves while also trying to cram as many Confederate Battle Flags as possible into their canvasses (see here).

As Gary Gallagher noted, “Recent art…relegates black soldiers into cameo appearances. Virtually absent from advertisements in the mainline Civil War magazines, they crop up occasionally in some of the artists’ books” (Causes Won, Lost, & Forgotten, p. 188).

One exception to this rule is Rick Reeves, who has done several pieces specifically related to United States Colored Troops.

The piece below is entitled “Pride Over Prejudice” and it depicts black soldiers guarding prisoners in the aftermath of the Battle of Nashville – the first time that the Army of Tennessee had faced USCT’s in large numbers. The black units engaged in the fighting were the 12th, 13th, 14th, 17th, 18th, and 100th USCT, many of whom were inexperienced which resulted in horrific casualties (the 13th USCT alone lost 40% of its strength). 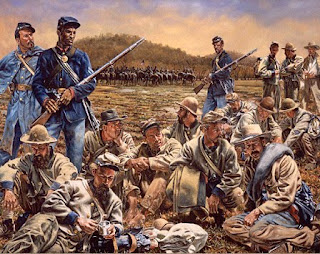 When the battle was over, one Arkansan wrote in his diary: “Oh woeful humiliation, the faces of Negroes!” – an emotion clearly conveyed in the faces of the Confederate troops in the painting.

The second painting is simply entitled “26th USCT”, a unit organized at Riker’s Island that did all of its fighting in South Carolina. 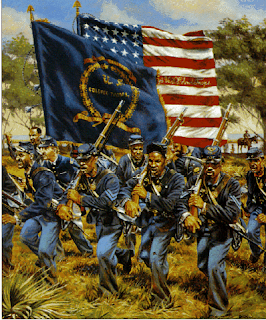 Reeves has also painted the 54th Massachusetts’s famous assault on Battery Wagner. Kudos to him for having the boldness to paint scenes that won’t necessarily make him a lot of money but pay homage to soldiers who deserve to be painted every bit as much as the heroes of the Lost Cause.
Posted by Jimmy Price at 12:58 PM