Since I posted the picture of Christian Fleetwood's Medal of Honor a few days back, I thought I'd share the page from his diary where he describes the Battle of New Market Heights and his heroic actions that day. 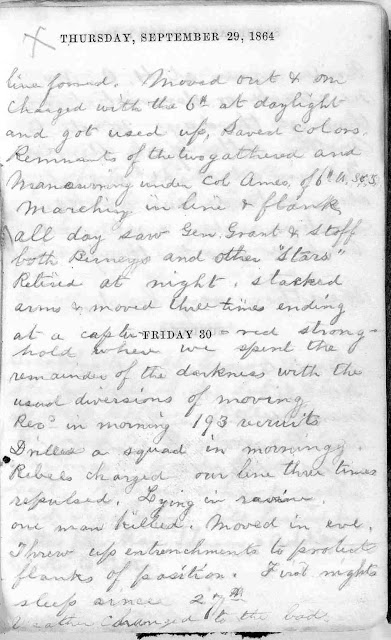 THURSDAY, SEPTEMBER 29, 1864
line formed. Moved out & on
Charged with the 6th at daylight
and got used up. Saved colors.
Remnants of the two gathered and
Maneuvering under Col Ames of 6th U.S.C.T.
Marching in line & flank
all day saw Gen. Grant & Staff
both Birneys [brother generals] and other “Stars”
Retired at night. stacked
arms & moved three times ending
at a captu FRIDAY 30 red strong-
hold where we spent the
remainder of the darkness with the
usual diversions of moving
Recd [Received] in morning 193 recruits
Drilled a squad in morning
Rebels charged our line three times
repulsed. Lying in ravine.
one man killed. Moved in eve.
Threw up entrenchments to protect
flanks of position. First nights
sleep since 27th
Weather changed to the bad.
Posted by Jimmy Price at 9:19 AM