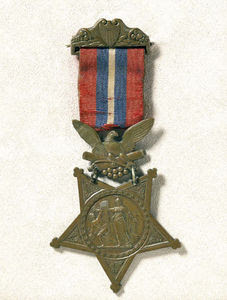 The picture above is the Congressional Medal of Honor that was awarded to Sergeant Major Christian A. Fleetwood of the 4th USCT for his bravery at the Battle of New Market Heights on September 29,1864. It currently resides in the collection of the Smithsonian Institute. His citation reads: "Seized the colors, after two color bearers had been shot down, and bore them nobly through the fight."
Fleetwood was one of fourteen USCT's who would be awarded the Medal of Honor for what Colonel Samuel A. Duncan called "unflinching heroism" in his account of the battle.

If you're lucky enough to know someone who has earned the Medal of Honor be sure to say "thanks" today - and every day.
Posted by Jimmy Price at 7:59 PM