In addition to the anniversaries of Shiloh and Saylers Creek, April 6, 2010 also marks the 145th anniversary of the day that some of the heroes of New Market Heights were awarded their Congressional Medals of Honor.

The genesis of this important event started immediately after the battle when Union general Benjamin Franklin Butler proposed the idea of promoting men like Christian Fleetwood and Powhatan Beaty to officers for their heroic deeds on the field of battle. In spite of the fact that there were a handful of black officers in the Union army already, the War Department demurred and instead decided to issue the Medal of Honor to some of the names that Butler had put forward.

Look closely at the photograph below. It was taken in April of 1865 at Fort Slocum in Washington DC. If you look at the gentleman fourth from the right you’ll see Sergeant Major Christian Fleetwood wearing his newly-issued Medal of Honor. 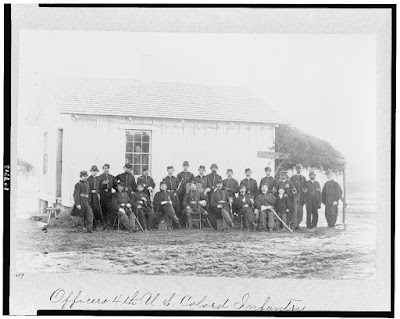